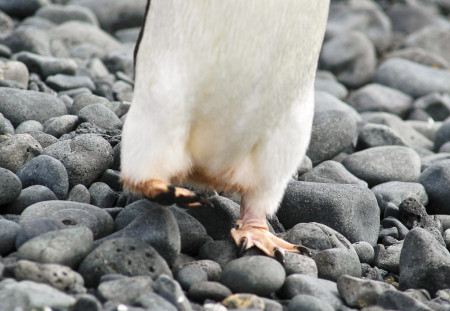 I have never been a bird watcher, but the antics of the penguin are captivating. Under the Antarctic Treaty there are rules about how close you can get to wildlife, but there are no rules for the wildlife and how close they can get to you. So, if you stand or sit quietly on a rock in Antarctica you will find curious birds waddling up to you to take a look. It is a photographer’s dream to be able to observe so closely. Yet it is a challenge to compose photographs that aren’t just snapshots, but that tell a story about penguins and their life in this harsh climate.

I ventured to Antarctica in 2004, just before it became THE eco-tourism destination. Argentina was politically unstable at the time, so we flew to Santiago, Chile before taking a charter flight south to Ushuaia where we boarded our ship. For me, it was a trip to see how Antarctica compared to the Arctic, where I have traveled twice and hope to go again before the polar ice cap melts. Unlike the Arctic, which is the polar ice cap, Antarctica is a continent. We were able to land three times and walk on the Antarctic Peninsula.

In the Arctic there are days when you never see wildlife, so it is always a thrill when you do. In the Antarctic you see animals daily, whether it is a bull elephant seal or a species of penguin you haven’t seen yet. And if you are lucky, you will see the leopard seal, a particularly nasty-looking creature who is always in search of a penguin meal. The rookeries are awesome to view and there is almost always a waddle of penguins.

My favorite penguin picture was taken near the southernmost point of the trip after passing through the Lemaire Channel. I noticed off the starboard bow two Gentoo penguins making their way across a pristine white landscape. As I watched them waddle along, I realized that they were a couple out on their own. I kept watching, and like a wedding photographer, I kept waiting for just the right moment. I just knew that these two penguins were going to make a great composition. And they did. They moved across to an area of ice that was on the edge of the water. The ice had a beautiful blue cast to it, and as the penguins stepped back into the sunlight, they both turned their heads in unison and lifted their flippers as I held my breath and took the picture. This photograph has become one of my all-time favorites; “dancing penguins” juxtaposed against the vast empty stretches of the continent.

Year’s later I went to hear George Lepp speak about his nature photography and he talked about how he just put the camera on “continuous”, shot as many frames as possible, and then looked for the best picture. I came to my penguin shot in the opposite way, watching and waiting for just the right moment. I realize how lucky I was, as in nature you can’t say, “Would you please do that again”. Even with my cautious approach, I have thousands of pictures of penguins. Recently I went through them all, once again, to see what I missed and what caught my eye many years later. So here is the current collection of my favorite penguins.

All prints on this website are © copyright Karen Akerson/Svenska Studios. The prints may not be used in any fashion except for Internet browsing. Any other use is a violation of US and International copyright law. All rights reserved.